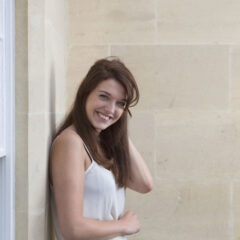 Lucy Holden is an author, screenwriter, and award-winning journalist. Her work focuses on current affairs and the anxious activities of her millennial generation, for which she has been described as a voice (either by Alastair Campbell, or a friend in the pub, she can’t remember).

Her first book LUCID published by Simon and Schuster in February 2022. It is the story of an extreme decade in an extreme generation, during which Lucy graduates and descends upon London. In these hedonistic years she tries to make it in a tough modern world where love, housing and work contracts are temporary. This life comes to an abrupt end when Lucy is thrown back to her parents’ house by the pandemic. Told with her trademark humour and no-holds-barred honesty, it is a story of resilience and hope which touches on trauma and a family history of mental illness, as she tries to work out who she is and what her future will be in a world that feels upside down.

[Holden’s] memoir captures the essence of what it means to be a young woman today, with freedom and possibility jostling up against fear and uncertainty.
Laura Hackett, The Times

Lucy is also an exciting new screen voice. Her pilot script HUTCHING is a comedy-drama, a British BROAD CITY, in which two young women try to fix their problems through female friendship, hoping that sharing a bed in their London hutch (they can’t afford not to) will keep them away from romantic relationships as they work out what to do with life next.

After graduating with a degree in English Literature from Leeds in 2013, Lucy was trained by The Times in their London and Edinburgh offices. She won the Guardian Student Media Awards’ Feature Writer of the Year in 2013 before being shortlisted for Young Journalist of the Year at the British Press Awards in 2014. Now freelance, she is a dating columnist for the Evening Standard and writes features for publications including The Times, The Sunday Times, The Telegraph, the Daily Mail and magazines including Grazia and Style. She is a contributor to BBC radio, Times radio and 5live; a trained stand-up comedian and has completed short courses with Faber and RADA.

She lives between London and Bath.

Call Emily to discuss Lucy or other Authors & Writers