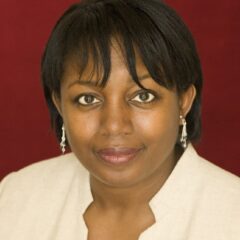 Malorie Blackman has written over 70 books for children and young adults, including the highly acclaimed Noughts & Crosses series, Thief, her science fiction thriller Chasing the Stars and most recently, the fifth novel in her Noughts & Crosses sequence, Crossfire, published by Penguin Random House Children’s in summer 2019.

Malorie has written for the eleventh series of Doctor Who, starring Jodie Whittaker, co-writing the episode Rosa with Chris Chibnall. This episode won TV Show of the Year for ‘making a positive social impact’ at the inaugural Visionary Honours at BAFTA in 2019.

Her work has also been adapted for TV with the 6 part adaptation of Pig-Heart Boy winning a BAFTA. The recent TV series Noughts + Crosses  was  produced by Mammoth Screen for BBC One.

A stage adaptation of Noughts & Crosses, by Pilot Theatre, ran from February – May 2019, under the direction of Sabrina Mahfouz.  It is also scheduled to run in Autumn/Winter 2020.

Call Emily to discuss Malorie or other Writers