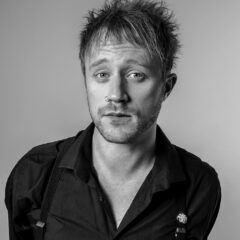 Matthew Greenhough is a working-class writer and performer from Sheffield working across stage, radio and TV. He was a member of the BBC Drama Room 2020-21 and is the founder and creative director of Wound Up Theatre.

After spending his youth in punk bands around Yorkshire, Matt started writing in his twenties, after performing stand-up comedy as a dare. His writing uses comedy to explore seismic issues through dark, character-led stories, informed by his background. He has been described as “skilfully juxtaposing the poetic and mundane – a sweary Alan Bennett with funkier hair”.

Matt was invited to join the BBC Drama Room 2020-21, having been shortlisted for the BBC Drama Writers Programme the previous year, and during the course wrote his first TV pilot script, KILL THE POOR, a pitch-black satirical drama about two childhood friends who accidentally find themselves as figureheads on opposing sides of the “culture war”. The project is currently in development with The Boom Group. Matt is also writing a historical radio play, PHILISTINES for BBC Radio 4 and his first short film with Film4.

Matt is a former associate artist of The Pleasance Theatre, Islington and a recipient of The Peggy Ramsay Foundation and The Live Theatre Bursary, awarded for innovative approaches to story-based performance.

Matt wrote and performed the Amnesty International Freedom of Expression Award-listed play, BISMILLAH! AN ISIS TRAGICOMEDY. BISMILLAH! ran for over 90 performances, including VAULT and Edinburgh festival runs, a transfer to the Pleasance Theatre, London and a National Tour. His most recent stage show was IT’LL BE ALT-RIGHT ON THE NIGHT which enjoyed a critically-acclaimed run at the Edinburgh Festival, transferring to London for ‘Best of the Fest’, followed by a National tour. Earlier theatre work included DELUSIONS OF ADEQUACY (Edinburgh Fringe) and #VILE: THE UNTIMELY DEMISE OF A MANUFACTURED POP STAR (Edinburgh Fringe).

Call Emily to discuss Matthew or other Writers