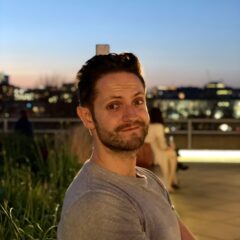 Ben previously worked at ITV Studios as a Development & Script Executive before making the leap into writing.

In 2018, Ben participated in the ‘Advanced Writing for TV Drama’ programme in London and Los Angeles for future show-runners.

In 2017, Ben contributed a short play for ‘Nothing to Declare’ at the Southwark Playhouse, London.

Call Jonathan to discuss Ben or other Writers