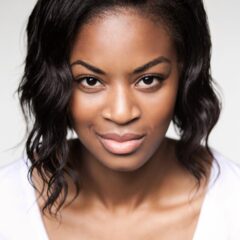 Racheal Ofori’s PORTRAIT at Women of the World Festival

Racheal is a writer for upcoming BBC1 Comedy Drama BLACK OPS and has also recently contributed an episode to the television adaptation of Neil Gaiman’s ANANSI BOYS (Red and Endor Productions). Her latest stage play SO MANY REASONS, which was produced by Fuel Theatre, transferred to the Soho Theatre for a week in March 2020. It is currently being adapted into a TV pilot for Fudge Park Productions.

Racheal’s TV script HERE AGAIN is in development with Balloon Entertainment. She also developed the TV pilot DYSFUNCTIONAL with Balloon, which was chosen for a Sky Table Read.  In 2017, she was selected for a TV writing bursary with Creative Skillset. She was also part of the writing team on the second series of KISS ME FIRST.

“Racheal Ofori is a British-Ghanaian millennial reckoning with sex, spirituality and herself in this refreshing one-woman show…Ofori is a hugely engaging performer” (Lyn Gardner, The Guardian)

“Ofori’s show is a big achievement, boldly depicting the weight of cultural heritage amid the pressures of millennial experience and the quest for personal contentment.” (Anna Winter, The Stage)

“It’s refreshing to hear someone tackle faith onstage without shame, embarrassment or cynicism, and Ofori really wrestles with her feminist theological dilemma. It matters to Melissa, so it matters to us – whatever our beliefs.” (Matt Trueman, WhatsOnStage)

A “hilarious quintessential guide to life has a British Ghanaian woman in the millennial age…Ofori is a tour-de-force”. (A Younger Theatre)

“Ofori’s stories make us laugh, make us empathise and make us think about wider issues of religion, shame and sex” (The Reviews Hub)

Her previous one woman show ‘Portrait’ was performed to a sell-out audience at the Edinburgh Fringe 2015 before heading off on a UK tour, finishing at the Bush Theatre as part of the Radar Festival from 16th – 18th November 2015, and then at the Southbank Centre as part of the Women Of The World Festival. In late 2017 it set out on another UK Tour, finishing at the Rich Mix in London on 11th November.

“Ofori is an engaging performer, and this is a script of real potential, slipping and sliding with grace between the boundaries of theatre, spoken word and comedy.” Lyn Gardner in The Guardian

“fearless and uplifting” The Scotsman

“It’s an exciting show from a writer/performer we’ll hopefully hear more from soon.” ☆☆☆☆ The List

“She is near perfection” Broadway Baby

Racheal has appeared on BBC’s Artsnight and has given a TED talk under the title ‘Utopia: Breaking The Rules’. She is currently writing a new play ‘Black Hair and Regeneration’ on commission to Cultural Cooperation and Isy Hawson, and developing another play with Fuel Theatre, the producers of Portrait.

Copyright The Agency (London) Ltd. – 2022
Not to be reproduced in any form without permission of the Copyright holder.

Call Jonathan to discuss Racheal or other Writers