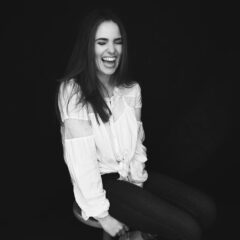 Sara is an award-winning writer/director, who most recently acted as Staff Director on Lucy Kirkwood’s The Welkin at the National Theatre. Prior to that Sara directed the Off-Broadway production of Dust by Milly Thomas, following three award-winning and sell-out runs at Edinburgh, Soho and Trafalgar Studios. Prior to that Sara directed Armadillo by Sarah Kosar, which opened at the Yard to rave reviews. Sara also directed Hunch by Kate Kennedy and Best Life by Tamar Broadbent, both of which had sell-out performances at Edinburgh Fringe.

Sara was shortlisted for the KSF Emerging Artist’s Award, is a recipient of the Deutsche Bank Award for Creative Enterprises and received an Off West End nomination for Best Director. She studied Drama and Theatre at Trinity College, Dublin and trained at Ecole Jacques Lecoq.

ONE HAND TIED BEHIND US (Old Vic)
Curated by Maxine Peake

THE QUALITY OF MERCY (Hackney Showrooms)
Written by Stuart Slade

THE ONE
Written by Vicky Jones
Directed by Steve Marmion

Call Ian to discuss Sara or other Directors & Writers

Call Nicola to discuss Sara or other Directors & Writers