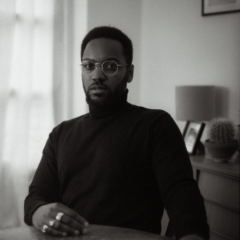 Shaun James Grant is an independent Writer, Director and Film Photographer. As a screenwriter (with Luke Shenton -Sharp) he has a desire to tell stories that observe how the decisions we make in life influence the outcomes of our futures. Channeling a strong sense of empathy he enjoys creating worlds that pose near impossible social questions of their central characters. He considers himself to be nothing more than an observer of these worlds, recognising the fallibility of human nature without passing judgement.

With that said, as a director he lives to tell immersive character driven stories, narratives that feel deeply personal to the central protagonists whilst also relatable to the audience. He has a deep sense of passion for creating worlds in which people understand and connect to the emotional struggle of the central characters. Whilst he considers film language to be an important factor to his work he doesn’t get bogged down in camera ego, believing the story and authenticity of said story is what keeps an audience invested. Aside from working in a constant music video and commercial space he has also just completed work on his first major short film Hope (co-writer, director) which is slated for the festival circuit in late 2020. Shaun currently resides in London with his partner and daughter who both heavily inspire his work

Call Nicola to discuss Shaun or other Directors & Writers