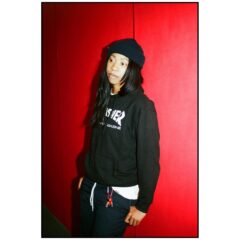 Nosa Eke is a platform agnostic writer/director working in traditional and interactive storytelling. She was chosen for the Soho Theatre Writers Lab and then attended the National Film and Television school. At the NFTS, Nosa finished her interactive digital series ‘The Grind’. It went on to screen at Underwire Festival and East End Film Festival among others, as well as the Sony Pictures Entertainment studios in LA, Picturehouse Central and Genesis Cinema. Her past shorts include ‘Moments Before Goodbyes’ and ‘Two Scoops’, the latter of which was shortlisted for Robert Rodriguez’s Keep Moving competition.

In 2016, Nosa took part in B3 Media’s Talent Lab programme receiving mentoring from David Varela (BBC’s Sherlock: The Network) and Nelson George (Netflix’s The Get Down) and received production funding towards her real time snapchat digital drama This Young Moment. Nosa has written an episodic interactive digital experience for 2017 FutureBook award winning start-up, UNRD and was featured in the Apple app store in April 2018 as one of “Britain’s Next Level Gaming Talent”. She was also selected to be in a writers room for an EA game. She was an associate artist at B3 Media and held a residency at the Nottingham Mixed Reality Labs. In 2017, Google Creative Labs Creative Director, Tea Uglow, chose Nosa as a future creative leader. She was also handpicked to direct content for Vodafone’s new youth brand VOXI. In 2017, Google Creative Labs Tea Uglow chose Nosa as a future creative leader. In the same year Nosa was spotlighted as a “next level gaming talent” by Apple for writing a real time narrative mobile phone experience.

She was picked for the 2018 BFI Flare/BAFTA mentorship programme where she shadowed director Wayne Yip (Misfits, Preacher, Deadly Class) on the Christmas special of BBC’s Doctor Who and in the same year she wrote an episodic narrative on the Amazon Alexa for the BBC. In 2019, She shadowed director Destiny Ekaragha on Season 2 of End Of The F***ing World and was also chosen as a 2019 Trailblazer by Accenture and TCOLondon for her work in the cross-section between technology and storytelling.

Her short film, Something In The Closet, funded by the BFI and Film London, screened at BFI London Film Festival 2019 where she was also picked for the Network@LFF programme. Nosa was selected a Film London Lodestar 2020, one of the emerging talents in the capital tapped to create and inspire future works in the industry.

Nosa recently directed pilot BIG AGE for Channel 4 and Tiger Aspect, as well as an episode of STILL SO AWKWARD for BBC, along with her BBC Snaps episode called IS THIS CAMERA STILL ON?. Nosa’s debut interactive AR feature film is in development with BFI Vision-Award winner Eleanor Whitley and the BFI.

IS THIS CAMERA ON 2021
Pilot – BBC Snaps
Director
BBC