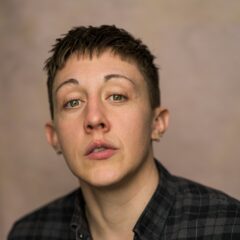 Charlie is a writer and actor, currently under commission for new plays with the RSC, The Globe and Pentabus. They will also be the Headlong Writer-In-Residence for 2022. JOAN will open at Shakespeare’s Globe on 25th August 2022.

Charlie’s play ‘FLIES‘ will be at the Shoreditch Town Hall, though plans are on hold due to the pandemic. Their new audio drama ‘MASSIVE’ is currently available only at Audible.

Amongst Charlie’s previous work, ‘BITCH BOXER’ won the Soho Theatre Young Writers Award 2012, the Old Vic New Voices Edinburgh Season 2012, the Holden Street Theatre’s Award 2013, and the Adelaide Fringe Award 2014. “Sweat-slick and tough, yet sweet and gifted with terrific timing” – The Times. “A pumped up underdog with a big heart” – The Independent.

Charlie’s new play ‘BLUSH’ enjoyed a sell-out run at the Edinburgh Fringe Festival where it picked up The Stage Edinburgh Award 2016 then transferred to Camden People’s Theatre as part of the Calm Down Dear Feminist Festival. It toured throughout 2017, having opened at the Soho Theatre.

‘POPS’ enjoyed a successful run at the Edinburgh Festival 2019 and then High Tide Festival. Charlie also spent 2019 as a member of the Old Vic 12, and also wrote new play ‘MOON LICKS’ for Paines Plough and the Royal Welsh College of Music and Drama. ‘BIRDS AND BEES’ was written and released by Theatre Centre is currently available as part of a Digital Package for schools. The play will tour schools and venues Nationally in 2023.

For screen work, Charlie won the inaugural BBC Screenplay First Award, and in March 2017 was named on the BBC New Talent Hotlist.

Call Jonathan to discuss Charlie or other Writers