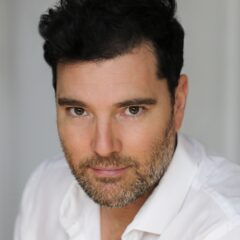 In 2021, he wrote a pilot for THE PEAK commissioned by ITV drama.

He has co-written two screenplays with the great Australian writer/director of Muriel’s Wedding, PJ Hogan.

He continues to work with PJ as a screenwriting partner across various projects.

Meanwhile, he has written three full length solo screenplays – most recently an adaptation of his own fourth novel – to be produced by Kevin Loader:

He wrote a pilot ep for a drama series adaptation of his own third novel for Mandabach:

He has also worked on several drama series and shows unofficially as a contributing writer since he began working for the screen following an initial hire in 2015 by Rainmark Films on THE FRANKENSTEIN CHRONICLES.

Edward Docx’s novels are translated into two dozen languages. They are published by Picador in the UK and Houghton Mifflin in the USA. He has been long-listed for the Booker Prize and won The Geoffrey Faber with his second novel.

His fiction has been compared to writers as diverse as Dickens, Dostoyevsky and Coetzee and is noted for its vitality and the attention given to character: ‘Docx has a gift for assessing “the exact shape and weight of other people’s inner selves, the architecture of their spirit” and even his most ancillary characters flare into being, vital and insistent.’ The New Yorker.

Writing as Logan Macx, Edward Docx is half of the writing team behind Walker Books’ exciting new middle-grade worldwide children’s adventure series: Swift and Hawk, to be published in the UK, USA and Germany in March 2022.

Edward Docx has contributed to most of the leading British and American newspapers and magazines. In the UK, his journalism most often appears in the Guardian and the New Statesman. He was short-listed for The George Orwell Prize for Journalism in 2012. He was short-listed in 2014 for the Foreign Press Association Feature of the Year. In 2015, he was long-listed for the George Orwell Rowntree Prize, and long listed again for the same prize again in 2020.

Call Tanya to discuss Ed or other