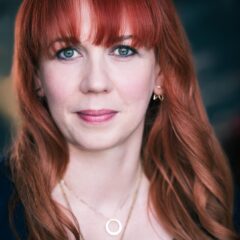 Sarah Rutherford is a Scottish-born, London-based playwright and screenwriter.

She is currently working with World Productions on a single TV drama commissioned by the BBC, and with RED Production Company on an original series.

Her most recent play THE GIRL WHO FELL had a 6-week run at Trafalgar Studios. She was the inaugural Writer in Residence of Park Theatre, where her play ADULT SUPERVISION was nominated Best Off-West End Production (WhatsOnStage Awards).

Her plays are published by Methuen.

Reviews for THE GIRL WHO FELL:

★★★★ “Hilariously provocative …  Adult Supervision comes highly recommended, and if there is one thing to do this month to celebrate Black History, this could well be it”   (The Upcoming)

THE AMAZING MISS A

THE GIRL WHO FELL

TONIGHT IS YOUR ANSWER

WHAT YOU DO TO PEOPLE

Sarah has also worked on R&D projects/readings at the National Theatre, the Royal Shakespeare Company, Donmar Warehouse, Out of Joint and Leeds Playhouse.

Call Emily to discuss Sarah or other Writers